Zak Group designed the exhibition graphics for Beazley Designs of the Year, the Design Museum’s annual exhibition that presents the most inspiring and critical design from the past year. The exhibition opens to the public today.

Zak Group used the exhibition design as a platform to present the work of six type designers whose typefaces were released in 2019. The title panels in each of the exhibition’s six rooms are set in a different typeface alongside a full character set and the names of its designer and foundry. According to Zak Kyes “rather than trying to create visual coherence, we selected typefaces that celebrate the contrasting and contradictory state of type design in 2019.”

Curator Beatrice Galilee described Zak Group’s role as “expanding the remit of the show to include typography, and thereby creating an exhibition within an exhibition. The studio’s strategy to respond both thoughtfully and playfully to many layers of curatorial and architectural needs led to a creative and dynamic partnership between curators, architects and graphic designers.”

Zak Group worked closely with architect Pernilla Ohrstedt on the design of the exhibition which draws upon the work of the American architect turned artist Gordon Matta-Clark whose ‘building cuts’ carved through derelict buildings to create monumental site specific sculptures. According to Pernilla Ohrstedt, “by reusing the walls from the previous exhibition and cutting views between each room, we hope to create connections between each of the six disciplines on display.”

Reducing and reusing the waste associated with exhibitions was integral to the exhibition design and graphics. In the first gallery, the numerals 2019 are carved out of the plasterboard wall, revealing the internal studwork. Elsewhere panels have been cut from the walls and used to announce the title of each room. A system of flat pack caption panels provides information about each nominated object. The powder coated panels have a single U-shaped cut that allows them to be bent in situ, according to their location on the wall or floor. Zak Group also designed the award trophies to be awarded to winners of Beazley Designs of the Year.

Beazley Designs of the Year is Zak Group’s second collaboration with Beatrice Galilee, former curator at the Metropolitan Museum of Art in New York. She previously invited Zak Group to art direct the third edition of the Lisbon Architecture Triennale. 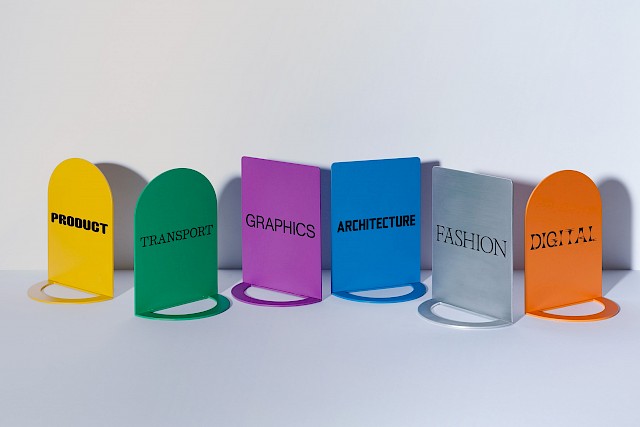