MMK’s new identity makes a cultural claim. Through the introduction of a superscript trademark symbol: MMK the identity highlights the ways in which brands lay claim to ideas and connect people. The MMK symbol is attached to individual words and phrases to claim them as part of the museum’s identity. To launch the identity a series of sweaters, t-shirts, lighters and caps emblazoned with FRANKFURTMMK claim Frankfurt as a fundamental aspect of the museum’s character. According to Franka Eberlein, Zak Group’s studio and project manager, the identity highlights “Frankfurt’s importance as a cultural power-house and home to important museums, schools and amazing artists.”

Zak Kyes describes the underpinnings of the identity as “an hommage to French conceptual artist Philippe Thomas, whose fictitious agency readymades belong to everyone® creatively appropriates the tools of branding and communication.”

The bespoke typeface Museum Sans was designed as a key element of the MMK’s new identity. It draws upon Frankfurt’s history as one of the most important cities for typographic innovation and a key force in solidifying the acceptance of The New Typography. The mono-line design of Museum Sans features high-waisted capitals that reinterpret the unusual geometry of typefaces such as Venus (1907) released by Frankfurt’s Bauer Type Foundry. Museum Sans is used across the identity system and on a range of printed matter, including exhibition materials, gallery guides, ads and stationery. Posters and banners for the inaugural three exhibitions are visible across the city of Frankfurt.

Designed and built by Zak Group’s development team the website mmk.art uses the new “.art” top-level domain extension. Central to the design of the website is an interactive navigation bar that traces the user’s journey through the website, allowing visitors to easily to refer back to previously visited pages. The website contains an archive of exhibitions from the museum’s twenty-seven year history.

With the new MMK identity, Zak Group continues its long-standing collaboration with curator Susanne Pfeffer. Previous projects include the identity of Faust, a new commission by artist Anne Imhof for the German Pavilion at the 57th Venice Biennale and the identity of Fridericianum, Europe’s oldest public museum. Both projects received numerous awards in Europe and the United States. 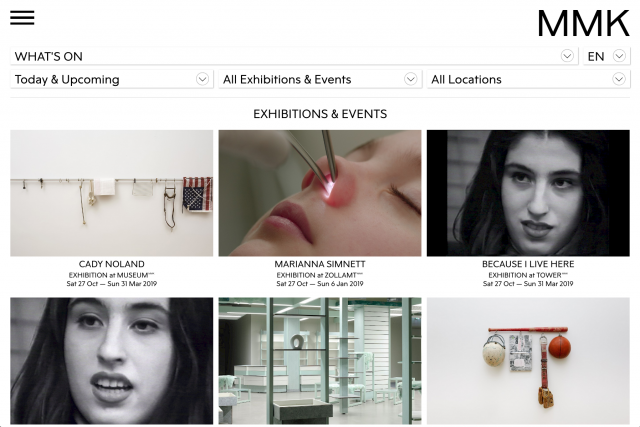